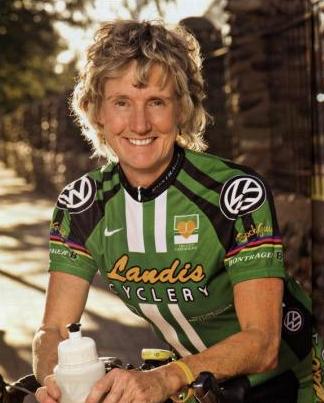 Every athlete suffers injuries. For Terry Roach, hers made her stronger. A back injury from a car accident left the world-champion cyclist in pain for nearly a decade – physical therapy provided only slight relief. After successful back surgery, though, and earning a master’s degree in secondary education from ASU with an emphasis on exercise physiology, Roach became inspired to help others. In 199 1, she created Body Stabilization Training, a physical training and rehabilitation program in Phoenix that uses different techniques – from yoga and martial arts to kinesiology – to heal and strengthen patients. The goal, she says, is to retrain patients to move their bodies correctly, taking stress away from certain muscles. Some clients are 80- year-old women who simply want so move around the house. Others are pro athletes, including Phoenix Suns players, who want to step up their games. Although the venture keeps Roach busy it hasn’t slowed her own physical ambitions. Aside from being a cyclist, she’s also a mountain biker, snow skier, water skier, scuba diver, tri-athlete, adventure racer, tennis player, golfer, hiker, camper and a single mother.

Was your injury a Messing in disguise?

Absolutely. It was the best thing that ever happened to me. Because of the research I put into the back program, I already knew some things, but I didn’t understand the importance until I had to come back from a back injury, I’ve been training since 1984, and I had the back surgery in 1987. Three years ago, I crashed while mountain biking and those injuries gave me perspective about neck problems. Within three weeks I was back teaching, wearing a collar because I already knew how to move. 1 was basically able to bounce back really fast.

When did you realize your program was a successful?

When I had my first patient come back and say, You’ve changed my life." That’s the most rewarding you can ask for as an educator. There is no such thing as pain-free, only pain management.

Describe your favorite type of client.

People who want to help themselves. I can give you the tools and the skills to help yourself. The body management skills can be used as you get older. It doesn’t matter if you’re a pro athlete or an 80-yearold woman who wants to get around the house. People who [endure] some pain have to invest more. I’ve been there.

What’s the worst trait a client can have?

What’s been your greatest accomplishment?

First, my children. My son (29) is a police officer and my daughter (25) is a registered nurse. We’re all into service. Second is my first world championship in England. It was an individual pursuit. It was 1998. In 1997,I had a lot of mechanical [problems] and lost the gold because of the mechanics of the bike. The next year I went back to compete. I broke a lot of records. I thought, "This is all worth it."

"Champions come back from adversity" My first coach, John Farrar, said that. I’ve used that phrase for every difficult thing I have in my Me. You put it in your head, no matter how many times you’ve been down -and I’ve been down. The man upstairs watches out for us.

When you play the part of a spectator, instead of an athlete, what sports do you like?

I love tennis and skiing. I love anything active. I love to watch kids’ soccer games. I’m so into movement. Anything involving movement.

I love to just sit and read a book – a non-thinking book – and listen to water. I let my mind go.

You must stick to a healthy diet – any guilty pleasured?

Are you into any of he fitness reality shows on television?

I’m not familiar with many except The Biggest Loser. It’s a fantastic show. It gives our society the idea that you make a change in yourself if you take the responsibility Sometimes, we want such a quick fix. It’s not easy – you have to invest that time. I love that show.

Who do you look up to?

I respect anyone who’s picked themselves up by their bootstraps. I really appreciate success stories. Anyone can come back from hardship.

We're not around right now. But you can send us an email and we'll get back to you, asap.

©2023 KLEO Template a premium and multipurpose theme from Seventh Queen